The Real Prince of Persia, (Demons straight from the pit?) 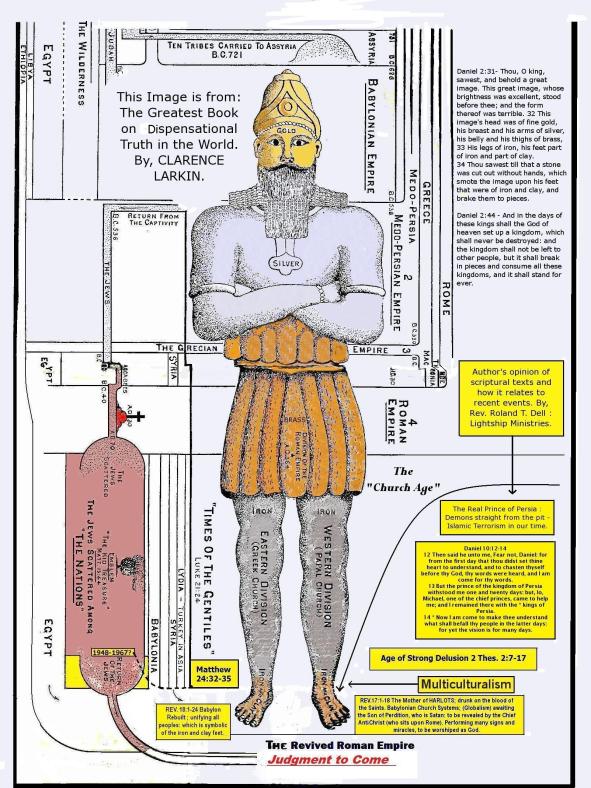 Where I am led to believe we are, as found and supported by the scriptural texts of the Bible. People have forgotten this is a spiritually discerned book, it is not meant to be studied as just another texts book; as it was written to the actual follower of “The Spirit of Truth” who is sent to give light to the actual brethren. The problem is, (as you will see in this graphic) most people are of the wrong spirit of error, which competes for the hearts of men. Daniel, Revelation and a couple other texts are used with Clarence Larkin’s drawing, in support of just where I think we are today in Bible Prophecy, and within the history of humanity.

The Prince of Persia, in the Biblical Book of Daniel; is Spiritually Describing Demons from the Middle East region, towards the end of days; or what I consider being, Islamic Terror, in our present times. They come to us straight from the pit, and only the Lord God himself will be able to deal with them! The only thing I can say is to resist the Devil, and he will flee from you Christian

Isn’t it interesting how Satan takes the God-honoring nations of the world and accuses them of being evil? Case in point; the Islamic world calls the United States, “The Great Satan” whereas for over a hundred years the U.S., has been used of God to stop such Evil as the holocaust, and ethnic cleansings, even while helping to protect Muslim populations. I am not saying that the U.S., nor any other land region on earth, are God’s people today; only that the Accuser, The Father of Lies, The Man of Sin, That Wicket, is actively and continually attempting to tear down any trace, of Christian informed cultures.

The Only place on earth that is physically important to God; is Jerusalem as HE has chosen to set his name there, and no other. For HIS NAME SAKE, he will not let Jerusalem be overcome, and by extension Israel. We who are found IN Christ; (the new covenant) today, are indeed Israel Spiritually to God, and no other found independent of the atonement are. This is NOT popular to point out, simply because it is the “offense of the Cross” which natural man hates, and wants no part of.

Below is a link to “The real Prince of Persia” Published by THE CHRISTIAN POST, it but touches on what DANIEL 9-10 speaks about; but only on a “feel good surface level” for evangelism’s sake, in my opinion.

More to the point, however: Daniel, I personally believe is describing what is happening today with Islamic Terrorism; not just in the middle east, but around the globe, and this has a far reaching effect on what the world is experiencing today! And

4 I prayed to ADONAI my God and made this confession: “Please, Adonai, great and fearsome God, who keeps his covenant and extends grace to those who love him and observe his mitzvot!

5We have sinned, done wrong, acted wickedly, rebelled and turned away from your mitzvot and rulings.

6 We have not listened to your servants the prophets, who spoke in your name to our kings, our leaders, our ancestors and to all the people of the land.

10 We didn’t listen to the voice of ADONAI our God, so that we could live by his laws, which he presented to us through his servants the prophets.

11 Yes, all Isra’el flouted your Torah and turned away, unwilling to listen to your voice. Therefore the curse and oath written in the Torah of Moshe the servant of God was poured out on us, because we sinned against him.

12 He carried out the threats he spoke against us and against our judges who judged us, by bringing upon us disaster so great that under all of heaven, nothing has been done like what has been done to Yerushalayim.

13 As written in the Torah of Moshe, this whole disaster came upon us. Yet we did not appease ADONAI our God by renouncing our wrongdoing and discerning your truth.

14 So ADONAI watched for the right moment to bring this disaster upon us, for ADONAI our God was just in everything he did, yet we didn’t listen when he spoke. 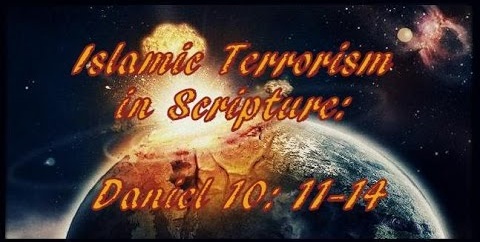 4 And in the four and twentieth day of the first month, as I was by the side of the great river, which is Hiddekel;

5 Then I lifted up mine eyes, and looked, and behold a certain man clothed in linen, whose loins were girded with fine gold of Uphaz:

6 His body also was like the beryl, and his face as the appearance of lightning, and his eyes as lamps of fire, and his arms and his feet like in colour to polished brass, and the voice of his words like the voice of a multitude.

7 And I Daniel alone saw the vision: for the men that were with me saw not the vision; but a great quaking fell upon them, so that they fled to hide themselves.

8 Therefore I was left alone, and saw this great vision, and there remained no strength in me: for my comeliness was turned in me into corruption, and I retained no strength.

10 And, behold, an hand touched me, which set me upon my knees and upon the palms of my hands.

11 And he said unto me, O Daniel, a man greatly beloved, understand the words that I speak unto thee, and stand upright: for unto thee am I now sent. And when he had spoken this word unto me, I stood trembling.

12 Then said he unto me, Fear not, Daniel: for from the first day that thou didst set thine heart to understand, and to chasten thyself before thy God, thy words were heard, and I am come for thy words.

13 But the prince of the kingdom of Persia withstood me one and twenty days: but, lo, Michael, one of the chief princes, came to help me; and I remained there with the * kings of Persia.

14 * Now I am come to make thee understand what shall befall thy people in the latter days: for yet the vision is for many days.

The Immigration Routes Into Europe…