DOOMSDAY POPE FRANCIS WARNS THE EARTH WILL NOT FORGIVE US.(link)

“God always forgives, but the earth does not,” the Argentine pope told the Second International Conference on Nutrition (CIN2) in Rome, a three-day meeting aimed at tackling malnutrition, a global scourge which afflicts poor and rich alike.

In a very strange message, Pope Francis warned that the Earth “would not forgive us” and would “respond with destruction” to man’s greed. Looks like Francis has become a New Age Universalist, steeped in Babylonian eccumentalism, pluralism, and multiculturalism, “in mixing it all together” (like the feet of Iron and clay, found in Daniel) – which will be destroyed; when the Lord returns for judgment….

Will he be the man who announces (reveals) the “man of sin” to the world, the great whore church, and her daughters?   PROBABLY SO, and even according to Roman Catholicism’s legend, this Pope  is said to be the last Pope on earth!

Rev. 13: 11 And I beheld another beast coming up out of the earth; and he had two horns like a lamb – and he spoke as a dragon…

Two horns “like a lamb” is a big, big, clue; to be worshiped as GOD – but speaks like a dragon…

I think it is interesting that this Pope charges humanity with; the earth not forgiving : this appears to me like “Satan will soon be revealed”, and worshiped as God.  That wicked, the son of perdition playing God – who shows many signs and lying wonder: looks to be transpiring – even as we speak! “Who sits upon the beast (church systems): having 7 heads, 7 mountains, 7 hills of ROME; 7 kings, having 7 types of governments..? 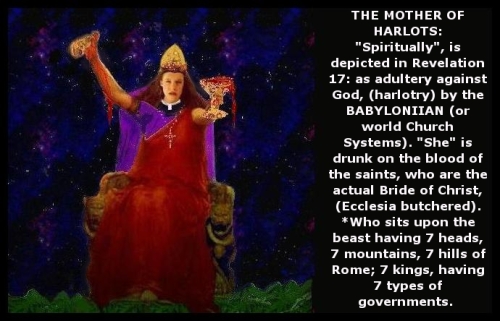 *Of course you can only understand this, if given revelation by the Holy Spirit – and not just Bible academia from the natural mind, which receives not the things of God.*