What America was meant to be…! 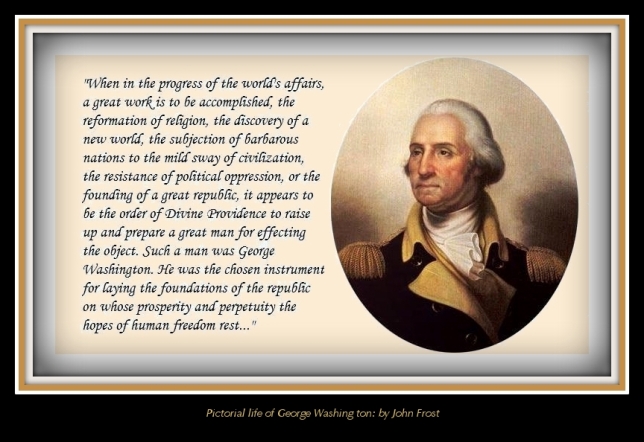 The Kingdom of Heaven should never be confused with earthly kingdoms. Such was the United States, once a God fearing people who honored the Lord God and his principles of righteousness.  In reflecting upon the words of John Frost; George Washington was once raised up by God, to form the foundation of this republic. The majority of her people were once a God Honoring civilization, like most Western Cultures, reflecting upon the Lord, and used in the hopes of human freedom from barbarism (savagery) around the world.

The Lord God is still on his throne, still instrumental towards his own ends. It now appears to be the order of Divine Providence, to allow Satan, his day to rule and reign; posing as God, performing many (false) miracles, to be worshiped as God shortly.

Mankind once again is attempting to rebuild Babble, independent of the Lord God. It is the New World Order; the mixing of iron and clay feet; as prophesied in the book of Daniel, and will likely be  introduced by the Chief Antichrist and Great Whore of Babylon; (Revelations 17-18) the revived Roman Empire, whom will introduce the Son of Perdition, That Wicked, The Man of Sin.

* (Revelation 20:9) And they went up over the breadth of the earth, and compassed the camp of the saints about, and the beloved city: and fire came down out of heaven, and devoured them.

Those who won’t listen: (Matthew 10:15) Verily I say unto you, It shall be more tolerable for the land of Sodom and Gomorrah in the day of judgment, than for that city.

(2 Thessalonians 2:8) And then shall that Wicked be revealed, whom the Lord shall consume with the spirit of his mouth, and shall destroy with the brightness of his coming:

Global Terrorism > (Daniel 10:12-14)  Then said he unto me, Fear not, Daniel: for from the first day that thou didst set thine heart to understand, and to chasten thyself before thy God, thy words were heard, and I am come for thy words.

But the prince of the kingdom of Persia withstood me one and twenty days: but, lo, Michael, one of the chief princes, came to help me; and I remained there with the * kings of Persia.

* Now I am come to make thee understand what shall befall thy people in the latter days: for yet the vision is for many days.

(Daniel 12:4) But thou, O Daniel, shut up the words, and seal the book, even to the time of the end: many shall run to and fro, and knowledge shall be increased.

In conclusion: I also believe that the mark of the beast (666) is a spiritual marking, on the forehead or hand; as in what you put your mind, or hand to in the world.Anything else would be too obvious to all the world, not elect towards salvation. After all, salvation is an affair of the heart, and not merely an academic or physical state.

The Horsemen of the apocalypse have surely been riding in today’s current events, and blood has been poured out. Blood Moons and Solar eclipses, have mirrored the high holy days of the Hebrew calendar… Not much more needs to happen in my opinion, until Satan appears on stage – posing as God; and most will be deceived, we are warned!

Mark 13:22 For false Christs and false prophets shall rise, and shall shew signs and wonders, to seduce, if it were possible, even the elect.

Matthew 24:24 For there shall arise false Christs, and false prophets, and shall shew great signs and wonders; insomuch that, if it were possible, they shall deceive the very elect.