Surely you don’t think? Satan said to the woman. 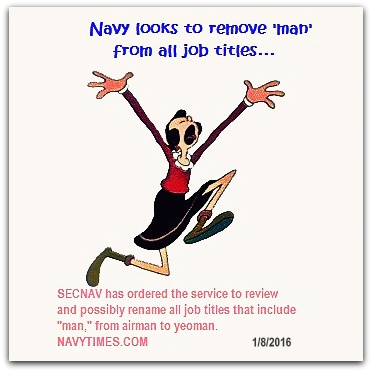 The term SEAMAN (as written in the English), goes back to prehistoric times, probably originating with the Cretans around 1500 or 1400 years Before Christ. Yet nowadays it seems to be a favorite pastime of progressives to modify and change the language to suit the way they wish others to think, or to embrace their philosophy in a postmodern world.

It is the reversal of God’s Order, and persecution of the brethren creeping in.

The Dark Ages started like this; a people controlled by elitists, who only wished to “Lord Over” the masses, even controlling the people’s faith, thoughts and actions. The age of enlightenment I think really started with the printing of the Bible, so that the Roman Priests would no longer have control in “hording the scriptures” for themselves, and their for controlling the masses.

It was the Reformation which then broke the back of the Roman Catholic Faith, and freed the minds of the people.

Rome knew that if you could limit truth to others, you could maintain control over the masses. It is ironic that liberalism once embraced knowledge for all, yet today progressivism wishes to once again enslave people’s to their “new world order”.

It is a love for the world, possessions, creature comforts, and power which drive the politician to be seated over others. This is not freedom but tyranny, and the young U.S. Government wrote a constitution and bill of rights with the hope of containing such evil, while researching many a philosophy, ancient governments and the Bible.

Once again, even our language is under assault; but for over a millennium, the freedom which the scriptures provided to the individual were invaluable. The reason is that it is God who provides freedom to men. That’s right – I said men; the ones who Satan wishes to oppress, in opposition to God’s Order!

Most do not understand that “children of the devil” are just that, and darkness is their fruit, as they have no light to see. This is a spiritual condition; and is why Luke 18: 7-8 reads {7 And shall not God avenge his own elect, which cry day and night unto him, though he bear long with them? 8 I tell you that he will avenge them speedily. Nevertheless when the Son of man cometh, shall he find faith on the earth?}

We are living in the days of Multiculturalism; the mixing together of the feet of “Iron and Clay”, as prophesized in the book of Daniel; which God promises to destroy. Babylon, the new world order – independent of God. The age of strong delusion, and gross darkness.

It is the Believer who has always been singled out and persecuted by the world both now, and in ancient times of wickedness! Is it any wonder that Joe Biden said that Bible believing Christians violate LGBT by simply existing? The world’s enemies have always been the salt and light to an evil world. And changing the language is the oldest trick in the book by Satan!

The Brethren are commanded in Matthew 24: 42 {42 `Watch ye therefore, because ye have not known in what hour your Lord doth come ;} (prior to Christ’s return). So to be complacent to such a commandment is extremely dangerous to one’s life both spiritually and physically speaking lest you be deceived. “The light which was in the world” grows dim, the darkness has come, the camp of the Saints has been overrun: and the ones who wish to maintain their lives, must lose it to the worlds’ love for darkness, so the “Man of Sin” who will come and claim to be God, performing many signs and miracles deceiving even the elect (if possible).