Most people think that the “Word of God” is the Bible, loosely speaking the texts is the divinely inspired writings composed of letters profitable for reproof and correction, written to the brethren who are spiritual Israel. However, more distinctly the “Word of God” is a living word which is found in the hearts of those who follow the Lord God of Israel in their “heart of hearts” – simply because they love Him above all else.

John 10:27-29 (KJV) 27 My sheep hear my voice, and I know them, and they follow me: 28 And I give unto them eternal life; and they shall never perish, neither shall any man pluck them out of my hand. 29 My Father, which gave them me, is greater than all; and no man is able to pluck them out of my Father’s hand.

At this point, (because this is a blog post) most will spiral downward into arguing theology and doctrines: yet that is NOT my point in writing this post today. Rather it is to show that the “Word of God” to me was found in a simple texts written in the 1880’s by J.H. Merryman, called THE UNITED STATES LIFE-SAVING SERVICE.

“The Lord spoke this to me” sometime after nearly drowning in the Surf at Ocean City, MD., nearly in front of the U.S. Life Saving Museum: a short time after serving my time with the U.S. Coast Guard overseas. I was also very interested in the historic maritime trade and working for the Baltimore Maritime Museum, under command of Capt. Robert Cooper of the Lightship Chesapeake. At the time a floating and operating ambassador for Baltimore City – Recreation and Parks.

The Following is from page 12 of by J.H. Merryman’s book, a passage which very personally helped to grow my walk, in experiencing and walking with Christ.

From page 12 “Keeping your eye on the Keeper”. 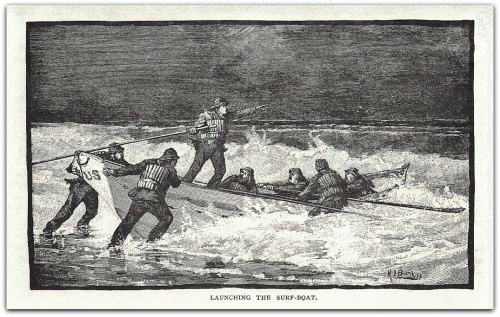