I once had a soldier who served in France during World War Two tell me candidly “dammit, you dig your own foxhole, if you jump in mine at night, I’ll kill you”! 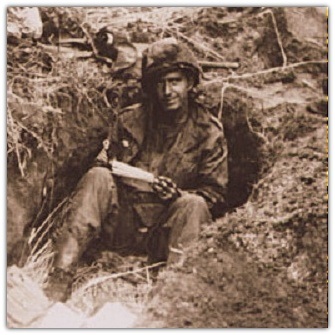 Dig your own foxhole, if you jump in here at night, I’ll kill you!

I served in the military from 1980-2007, I can remember my father saying that the Army had never changed since he was in! I was excited about that, and the manly bond I would develop with my brothers in arms. I was raised on the pledge of allegiance to our flag, took shop classes in school, and played Army with the boys around the neighborhood.

GI Joe’s were our toys of choice, we would dress them for combat against the enemy, as it was our duty to protect and defend our way of life, family, and liberty!

When I became a man, I enlisted to serve our country, and the noble land I had come to respect, in no short measure because of my accelerations in the Boy Scouts of America, who taught us reverence foremost, and last in the Boy Scout oath. We were morally straight, and that meant exactly what we thought it meant – straight, not a deviant from the moral code of the family structuring!

We defended our positions of moral leadership, in preparation of someday providing and protecting our families from the evil forces in the world, which would threaten our great land. All of the men in my family since the American Revolution served in the military for at least one enlistment, as this was what was expected for a man to do, in all the generations past.

My father, my grandfathers, and before would have been appalled at the idea that their daughters would venture into a Navy shipyard, or Army barracks, for fear of what might happen to them! Is that culture wrong for holding such values? I think not, as these values (roles) which evolved as the most effective means to secure the family for the next generations to come.

Of course these are also godly values, which the Creator designed us to live by, and the more one strays from this design, the more complicated and corrupt a society becomes. Douglas Mac Author said it best: “Pluralism is the enemy, the longer it is allowed to exist, the bigger and bloodier the wars it creates!”

Natural law, is appalling to progressives, as it lends restrictions to “an all embracing pluralism”, which at its furthest limits, cannot even distinguish between right and wrong, good or bad – as relativism becomes God. This is why all the philosophers I have ever spoken with, seem distant and even ungrounded from any type of absolutes! This is where the limits of human understand reach their end. Or as Solomon put it, “Vanity, vanity, all is vanity…”

This was the basis for the Western cultures, which have been immensely blessed throughout history. Or what some might call the Judeo – Christian principals. When you discard these principles on the ash heap of history, as being antiquated, you are actually declaring that the Lord God our Creator is antiquated, and you enter into the darkness of natural understanding.

So, to get back on point, we now have a military which is “all inclusive” of everyone and every life style, which by its very nature must exclude the values I have aforementioned from our past. Equality is a myth, it does not exist, nor ever has! It is the lie (false narrative) which only allows the most powerful groups to maintain control over the masses, it is mere tribalism when all the different peoples who happen to be in power, insist upon their own lifestyles! Democracies cannot function when everyone insists upon their own ways!

What should we teach our boys who will become men, and our daughters who bare the offspring of our men? Are they equal, or are they created differently for a reason? Many nowadays would not even consider such a question, as that might infringe upon their (so called) rights!

In speaking with a Soldier buddy of mine at Ft. Hood, TX. He informs me that many women now take the testosterone hormone, so as to keep up with their male counterparts in the infantry! This is what gives me so much disgust, as I remember back to a simpler time when only men were allowed in combat arms, and rightfully so! It seems to me that the white straight male, is the only one excluded from having “rights” within our military today. If a female (for example) cannot function well in a field environment, the male soldier is at the very least, brow beaten to conform to the “New Army culture” and asked questions like; “are you saying you don’t want her in your foxhole”?! If the man answers in the affirmative, his career, and possibly even his personal freedoms become endangered by officials who are more concerned with their (political) careers, than they are with what is most effective and advantages’ to the whole of their troops!  And, I am talking about the lives of both men, women, and deviants there of…

The military used to be able to legally discriminate based upon its needs, now it seems to me they only discriminate against the glue, in which once held together the very fabric of the esprit décor of the American Armed Forces.

Scriptural references: (which are only written to an actual disciple)

Of course, I am most guilty of violating the so called establishment clause, which not only separates Church and State, but wholeheartedly wishes to overcome any of its restrictions within society today. For, like righteous Lot; I am “vexed by the filthy conversation of the wicked” 2 Peter 2:7.

The “Church” is guilty of trying to teach the wicked by carnal means, the things of God, which are only given by the Lord to his people, they do not apply to the general population, which most evangelists fail to understand! 1 John 4: test the spirits, Matthew 7:6 give not which is Holy to dogs.

As for my people, (Spiritual Israel – not carnal) “children are their oppressors, and women rule over them. O my people, they which lead thee cause thee to err, and destroy the way of thy paths”. Isaiah 3:12.

Your wives, your little ones, and your cattle, shall remain in the land which Moses gave you on this side Jordan; but ye shall pass before your brethren armed, all the mighty men of valour, and help them; Joshua 1:14

Manly men…. Know ye not that the unrighteous shall not inherit the kingdom of God? Be not deceived: neither fornicators, nor idolaters, nor adulterers, nor effeminate, nor abusers of themselves with mankind,  1 Corinthians 6:9

For the mystery of iniquity doth already work: only he who now letteth will let, until he be taken out of the way. 2 Thessalonians 2:7. – IS WELL UNDERWAY!

For, behold, the darkness shall cover the earth, and gross darkness the people: but the LORD shall arise upon thee, and his glory shall be seen upon thee. Isaiah 60:2.
Come quickly Lord Jesus, the whole creation groans for the revelation of the sons of God!

One response to “Maximum Disgust!”