This post is for or those of us who continue in Christ, as opposed to those who have started with him; yet have continued in the Babylonian Church instead!

I realized this this morning as I looked back at one particular man which seemed to mirror my moves around the Island. It is quite strange he continually bumped into me at every church I visited, (in my ignorance) and within the market place, even at the dump this fellow would always show up at the same time and place in which I also arrived.

This changed little through the years, going from a young man to an older one. Both of us claimed to be followers of the Lord, yet I noticed more and more of a division occurring between us, and in very stark contrast!

This man is an entertainer of sorts, and loved working with kids in his always upbeat and “happy clappy” type of entertainment. Whereas I am more of a private person who never seemed to master the social skills in entertaining anyone, and if I did get a laugh, sadly it was often directed at me (*Christ within me).

When I joined the church in the early days, there was a concerted effort to be alongside the head pastor, one time I was even pushed aside when walking through the woods close to the man, almost knocked over by this brother so that it was only him who was in close proximity to the Pastor! I remember it vividly to this day, and remember thinking to myself, {now there goes a real suck ars} as I was familiar hearing down the waterfront in which I worked!

No that’s not pretty language, yet it does apply to the pig’s, dogs and wolves (as Jesus might have called them) which I have had the misfortune of continually being around! These types of political posturing is common in the world, as people strive upwards while stepping on others necks to “be something in the world” and cannot possibly be following Jesus Christ (without repentance)  even if they name him as their Savior!

Yet what are we told, should we be vocal about our discernment in such matters… Don’t judge, is the answer, which is also in stark contrast to 1 John 4 in the Bible, in which a Disciple is instructed to do! The reason of course is because this is a different spirit than the Holy Spirit, it is the Spirit of antichrist, the accuser of the brethren!

The man I have for mentioned, will not even talk to me or my wife now, as we are the testimonial of following Christ within us, as opposed to the counter testimony by the spirit of antichrist which is strongly present within the churchmen, or what a brother I know calls the “God-frees”; pun intended. 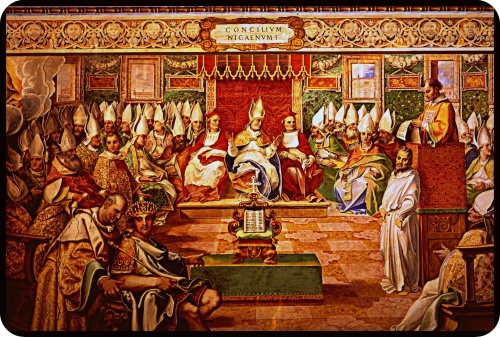 This spirit is the destroyer of the faith in which an actual follower of Christ moves in, it is the counterfeit spirit, the surrogate to Christ; the fit into the body of the Satan counter testimony, and destroyer of the brethren who have started with Christ. It is moving in natural understanding also known as carnality specifically when dealing with the Bible by systematic theologies!

The politics of the Devil is to be something in the world, in contrast of walking in the spirit of humility and dependence upon the Lord. It is the spirit of “who’s who” within the world, and when concerning church systems and Bible colleges it has become the worst enemy of a simple follower of the Lord, normally unbeknown to most brethren who think they are following Jesus!

Yeah, it is a trap of the Devil, devised by the butcher himself, soon after the Holy Spirit came and indwelt the original disciples. This counterfeit testimony which was produced widely by Constantine in the First Council of Nicaea, (325) the first ecumenical council of the so called “Christian church” has grown to immeasurable proportions around the globe, and is of the world. It is the Mother of Harlots, drunk on the blood of the Saints and the Martyrs of Jesus, (although most young brethren in Christ never grow to the point in recognizing it) or will wilfully take the broad road, (away from Christ) as to be comfortable in the world (and towards their own spiritual destruction) as to fit within the “Babylonian church systems”. She is the destroyer of the actual “ecclesia” who have been “called out of the world to follow Christ” and are either too weak to do so, or are not actually interested in their own sanctification, (in actually abiding with the Lord in truth) and are also known as “enemies of the cross’, as Paul first coined the phrase. It doesn’t matter the denomination, (as I am not speaking about teachings)  but rather “actually following the Lord” in Spirit. This is just another example of the Church of the Galatians, which has multiplied its head many times since.

Of course this does not include those who have “signed up for following Jesus”, and the Lord God has never chosen to do a work within, they only heap condemnation upon themselves while trying to make themselves acceptable to God, while being outside of him  ( Matthew 23:15) !!!

This has been a description of the enemy camp, which has infiltrated and infected the actual body of Christ (the camp of the Saints) , for those of us who will not come out of this Whore!