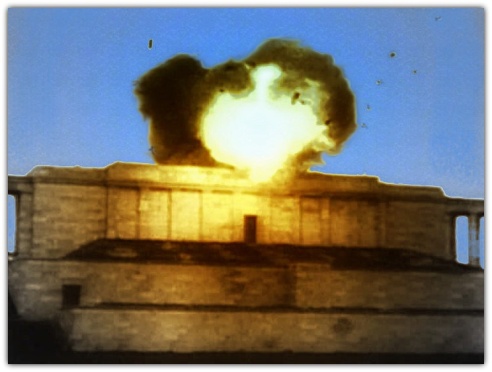 Hitler’s Zeppelin Arena (Prisoner) Building, with the NAZI Swastika being blown from the top at the end of WWII.

I was born when there were still 48 stars in the Union Jack, and raised as an American, holding Christian informed values. I was taught that it was the man’s responsibility to provide and defend his household, and if need be his Nation. I am not all ashamed in being taught what the good Lord’s principles are in relationship to becoming a man. I did fairly well within the Boy Scouts of America, making Star Scout – even when others went on to become Eagle Scouts. In our troop (35) we were taught to begin with Reverence (for God) as well as end with it, within the Boy Scout Creed.

Ungodliness in those days, was anything deviant or compromising with those values. Cultural Marxists (Humanists) had not yet gained control of our history and education systems, like they have today, and they had not yet succeeded in replacing the family structure in using feminism, homosexuality, and other compromising behaviors. There were only two sexes, male and female, with their roles provided in creating the most stable type of home environment, in producing the next generation of leaders and providers.

These were the values which were learned from generation to generation in those days, and the backbone of having a stable society and families. The Ten Commandments were at the basis of our laws, and sex outside of marriage, (between a man and a woman) were still frowned upon.

The 1960’s “fixed” all that: with their free love, drug induced culture and rank rebellion against the establishment and government. Some were imprisoned at the time, yet to my amazement were later made college professors within some of our “so called” more progressive universities! Many early universities such a Harvard, once stood as a beacon to Biblical values upon their foundlings. West Point honored the Lord God of the Bible, and based their moral curriculum around it.

At one time, vastly almost all our institutions were based upon these types of structuring. Yet humanism (Marxists) started pushing in to all our institutions in an effort to overthrow the Christian informed monocultures predominantly within the West. The new history being taught, became the beginning of “white guilt” and the evils of free enterprise.  The media widely covered the Vietnam war, it came into our households each night and showed the horror to the public, and sometimes instantaneously! As a result of the media, (controlled by the big 6) rebellion and often treasonous anti American acts were the result, and often perpetuated by Hollywood elites like Jane Fonda, while in total denial concerning the lives of our fighting men.

At the heart of this activity was the deep state (Illuminate) even then, a hater of God, free enterprise, and free people’s everywhere! I believe that the predominate Democratic Party was used as a tool by these so-called “Cultural Marxists” which really took off after the assassination of JFK, and LBJ being appointed as President.

Yet I still wanted to be an “American Fighting Man” fighting for a greater cause than myself, and I wanted to experience the “male bonding” which took place as defenders of righteousness! Oh yeah, I was a flag waving old school conservative who looked forward in developing into manhood after High School! The anti-military sentiment (by the left) still existed as a result of the Vietnam War, yet I still wanted to pay my dues (so to speak) in service to my country, like my father before me, grandfather, great-grandfather, and so forth.

The military seemed to me to be the last vestige for the traditional male, and I wanted a taste of it! The feminist were pretty much succeeding in all other careers within our culture, including fire departments and police forces. “To me” this was sad, and the standards kept dropping towards the lowest common denominators in the name of diversity!

In my view President Johnson’s idea of “the great society” has blatantly failed, yet the progressive still pushes to undermine any last elements of the “so called” Christian culture, which has openly been opposed by many a Democratic leader as the enemy of our culture ever since!

Fast forward to the 9-11 attacks on our Nation and the military. There was a move again toward patriotism after 9-11, the likes I have not seen since before the Tet offensives during Vietnam. Flags were openly displayed everywhere, the military had pretty much gained back it’s respect among most, and the Lord God was once again mentioned within the press. I was “called up” from my reserve unit to reinforce the ranks of many who had been shipped overseas under orders for Operation Enduring Freedom, and then Operation Iraqi Freedom. We were thanked by the Generals of the Army upon our arrival to Ft. Bragg NC, in the biggest call up since World War Two! It felt great to actually be doing something about the “War on Terror” which was now all around the globe.

I was then medically retired from the Army in 2007, just prior to Barrack Hussein Obama becoming President. I can remember Hillary Clinton being the first politician in espousing negative remarks about our wartime President Bush. She said “Bush lied and people died” concerning Iraq, and the American flags began to disappear from the front porches of America once again. These anti America, pro Communists from their days in college, were at it again. When Obama was elected as President, he blatantly stated that this was “no longer” a Christian country! And once again the accusatory deep state swings back hard against any vestige of unity in our land. And the fall of Iraq after so many American lives were lost in “liberating it” make most who fault there very bitter. Yet politicians don’t care, as long as they get theirs by using the uninformed masses, and even Illegal migration and voting to justify their means.

Divide and conquer has now become the normal tactic in imposing a one world order, and replacing our culture with another. The principles of the American Revolution, versus the French Revolution, has become the norm, and most Americans will never know the difference, as they were never taught these lessons. The white man has become the oppressor, and needs to be kept down, or effectively eliminated from regaining any type of control over the cultures, (and to say otherwise) makes you a sexist, racist or homophobic – not to mention xenophobia or any other words which have recently been coined by progressives in an attempt to change the culture.

Changing the culture of the military was also targeted by the Obama administration and the Democrats. I can remember my Father once telling me that “the Army has never changed” from when he went in, as we visited my first day of duty with the Army Reserves.  Yet nowadays however, a man is written up for often times just expressing an opinion – which might run contrary to the one size fits all Army which has now emerged from the so-called progressives, or maybe even the so-called “deep state”. The white male is now often marginalized, and even legally challenged in asserting himself in the functions of his duty if he is perceived to be biased in any way shape or form towards women, minorities, and even can be reprimanded for calling a transgender Sir or Mam, if their perceptions of themselves is felt to have been wrongly identified and oftentimes, there is no due process even afforded them.

This is divide and conquer at its finest, yet ironically the supposed new designed is to promote unity and unit cohesion! The truth be known, this is actually a satanic reversal of the Lord God’s order, and soon enough persecution may come to anyone who dares to express it openly.

Media control of people’s thoughts are already being censored, which parts of the big 6 like Google may sensor if receiving enough views, otherwise one can still pass under the radar so to speak. I would guess when Albert Pikes’ “Lucifer” shows up, this will not be the case, so post your blogs freely now before the thought police come and get you!

This surely is the great falling away the Bible speaks about, the earth is covered in spiritual darkness, and the people gross darkness, the “Restrainer” is gone (2 Thessalonians 2:7) – the camp of the Saints overrun, and the mother of Harlots; the carnal church seems to be flocking to.

Yet like Lot’s wife, whose heart looked back at Sodom and Gomorrah, even I must pray my heart is not taken for a love of the world, the world’s people, nor even a love for my country; which I was instructed to defend the principles of, and sworn to its Constitution.